Showing posts from March, 2015
Show all

Because he knew he could.. 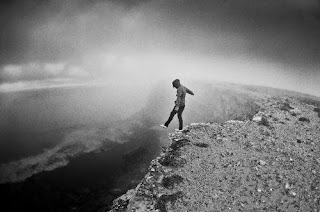 He did not leave his soul and body to become one with the universe..because he knew he could do that..any day...he may just decide to not wake up one day...become another foggy light in the memory of those he knew knew of his existence...he was aware of the pain he would cause those who really cared for him...in the eerie silence before the final act when his mind and heart dueled to decide whether to be a 'was' or to remain a non-existant 'is'..he could hear in that moment of silence the screams of disbelief of his friends...and the triumphant 'I always thought he would end up that way' of his true friends...just before his vision was smeared..clogged...with that single drop of tear in his eyes while the air around him mysteriously disappeared as if giving him a feel of what life would be after life...in that moment he saw her smiling,crying,laughing,not believing what she was hearing..still holding him in an embrace..still respecting his decision and c
Post a Comment
Read more
More posts